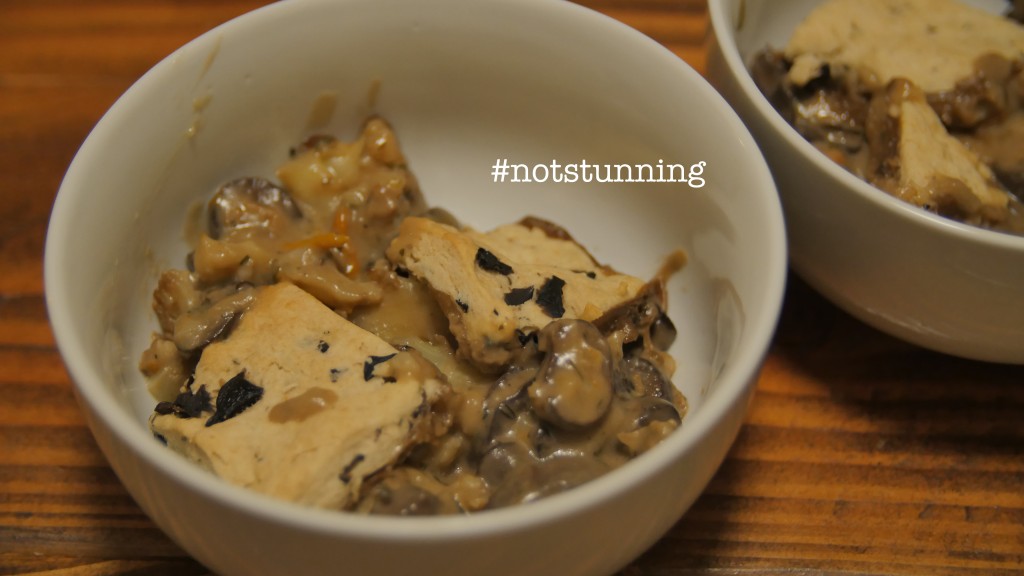 Warning: this dish is terribly unphotogenic! However, like most ugly food, it is pretty tasty, particularly so considering it’s vegan. I was a vegan for almost two years and during that time, I really explored vegan cookbooks and vegan cooked food as there are only so many raw items one can eat! I kept coming back to VEGANOMICON and this recipe in particular. It is a great thing to serve when you want something warm and comforting, even if it doesn’t know how to take a good photo!

This recipe has to be followed exactly in order to taste the way the author means for it to—so no substitutions, even with the herbs, which is a lesson that I learned the hard way. 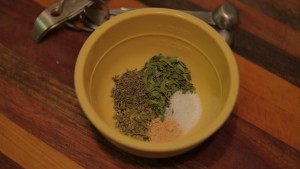 In a heavy bottomed sauce pan (not the Dutch oven) over medium heat, melt the margarine and sprinkle in the flour. Stir to form a thick paste. Cook the mixture until fragrant, bubbling and lightly browned, 4 to 5 minutes.

Temporarily turn off the heat. Slowly pour in the soy milk, using a wire whisk to str until smooth. Whisk in the dried herbs, mustard powder, salt and add bay leaf. Turn on the heat to medium and cook, stirring constantly with risk, for 8-10 minutes, until a thick sauce forms. Turn off the heat, remove the bay leaf and adjust the salt & pepper to taste.

Move on to the Veggies:

Heat the oil in the Dutch oven over medium heat. Add the leeks and carrots & sauté for 6-8 minutes, until softened. Add the mushrooms & vinegar, stir, & cook another 6-8 minutes until most of the excess liquid from the mushrooms has evaporated (THIS IS AN IMPORTANT STEP! Make sure to get rid of as much liquid as possible before moving on!). Add the cauliflower, stir briefly, cover partially & steam for about 8 minutes, until the cauliflower has just begun to soften. Remove the lid, turn off the heat and set aside.

While cauliflower is cooking, prepare the biscuit crust:

Pat out the dough on a lightly floured surface or give it a few rolls with a rolling pin, to form a circle or appropriate shape slightly smaller than the Dutch oven. Using a sharp knife, cut the dough into diamonds (you’ll be placing small squares of dough over the caserole, rather than one big disk of dough).

Give the sauce a good whisking (no worries if a skin has formed) and pour into the cauliflower mixture & stir completely to blend the veggie juices and sauce. Arrange the diamonds of dough over the mixture & brush with soy milk. Bake for 35 to 40 minutes, until the cauliflower is tender and the biscuits are cooked.

Allow to cool for 10 minutes before serving because the filling will be boiling hot straight from the oven!! Serve in a large bowl and your vegan friends and your tummy will thank you!

Have you cooked anything from this cookbook before? What is your favorite vegan recipe? Leave me a comment below!