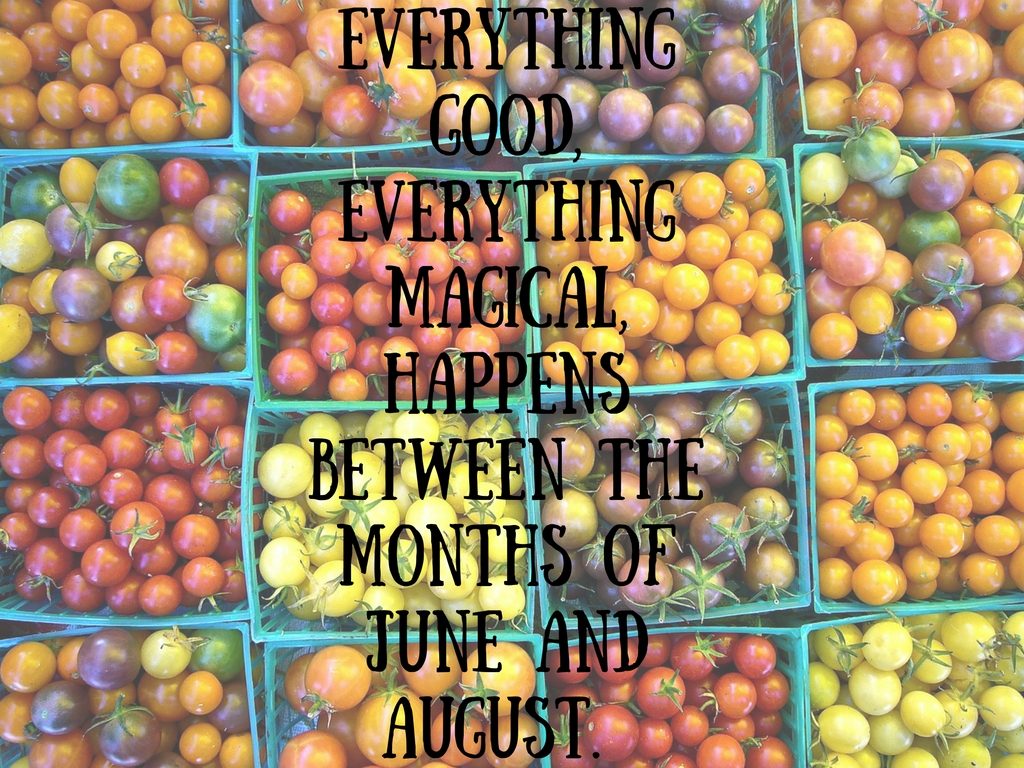 I have a backyard garden, one that I have mentioned (rather infrequently) on our Instagram, but haven’t really given myself the opportunity to talk about here. When we bought this house a few years ago, I envisioned growing fruits and vegetables and basically having a produce stand within reach of my kitchen. Then when we started this blog, discussing my garden was one of the things that I really wanted to do, but real life happened and it wasn’t exactly photogenic, so…you got no posts about gardening! I’m rectifying that today because I’m two years into vegetable growing and I’ve learned some stuff! I’m excited to share with you, primarily because that is one of the tenets of this blog: making mistakes so you don’t have to! But first, an introduction!

I have always had a few veggies and trees in pots at previous homes, but I hadn’t ever really been able to yield much of a harvest, particularly one that outweighed the effort that I put into it. Over the course of the last two years, my husband and I have installed four garden beds and several dwarf fruit trees with the idea that we would eventually get a new fence installed and then a garden path with stepping stones and gravel to complete the pathways so that I would be free to finish my plantings, utilizing the vertical grow space next to the new fence. Needless to say, as with all home renovations, this has taken far longer than we initially anticipated and is still a work in progress. However, I have had a fairly good run with my harvests in my beds, although also plagued by disappointments. And bugs. So many bugs! 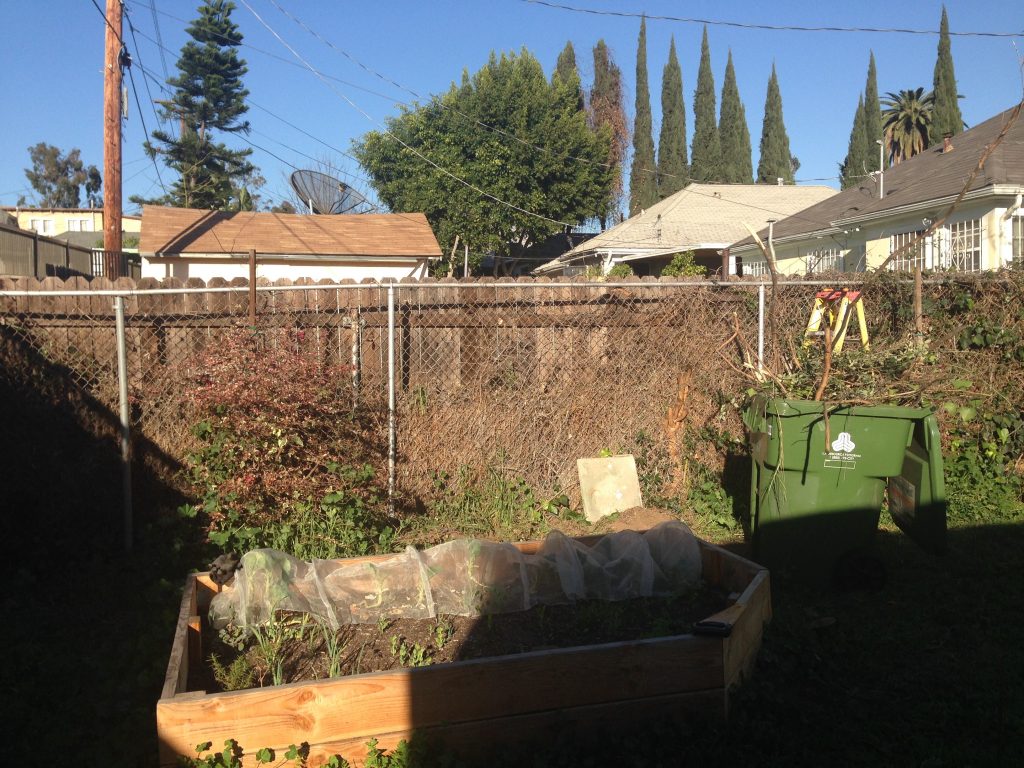 Removing all of this dead stuff was a huge, irritating job.

As you can see, the backyard was kind of a mess of delayed upkeep. I think the person that owned the house before we did was also a gardener but made some weird decisions. The dead stuff behind the chainlink fence was tall grass and a passionfruit vine run amok, in addition to two other types of vine that I have yet to be able to kill off completely. In front of the fence was cacti and bougainvillea, which I think was planted for the primary purpose of preventing someone from jumping the fence. These were in all kinds of bad shape. 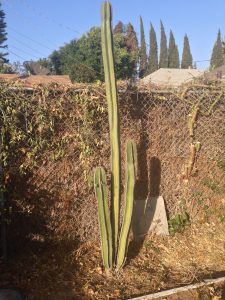 I actually tried to relocate the bougainvillea to our front yard, but because they are very persnickety about being moved, they did not survive. However, I was able to bequeath the large cactus to a friend and it seems to be very happy in its new home! I hate having to kill off growing green things, but none of these plants worked in this space or for our vision of the backyard. We also had to do a DIY grading of the dirt next to the fence in order to level things out and it was easier to do all of that shoveling if there weren’t things with giant thorns growing on them!

We also have tons of patchy crabgrass that we are currently still battling, but a lot of it was replaced by the garden beds. As I said earlier, I have the intention of getting a path and gravel down, so if I am able to install that properly, it should finally take care of the grass in the backyard for good and I cannot wait!! I’m tired of trying to pull it out in order to keep it from invading everything else! After getting rid of the plants, the horrible chain link fence on one side of the yard and removing all of the dead stuff, we were able to plant a Black Mission fig tree, a Pink Lady apple tree, a Shinseiki Asian pear tree, a Pettingill apple tree and an avocado tree (it died!).  I planted a Eureka lemon tree in the front yard (it also died!), near my house, and an all-in-one Marianna almond tree on the edge of our property, also in the front yard. There was a mature citrus tree that seemed to be on its last legs in the backyard, so I nursed it back to health and discovered that it is a tangerine tree! I’ve nicknamed it the giving tree because I’ve gotten wheelbarrow’s full of fruit each year so far. It is just a lovely addition to our home. 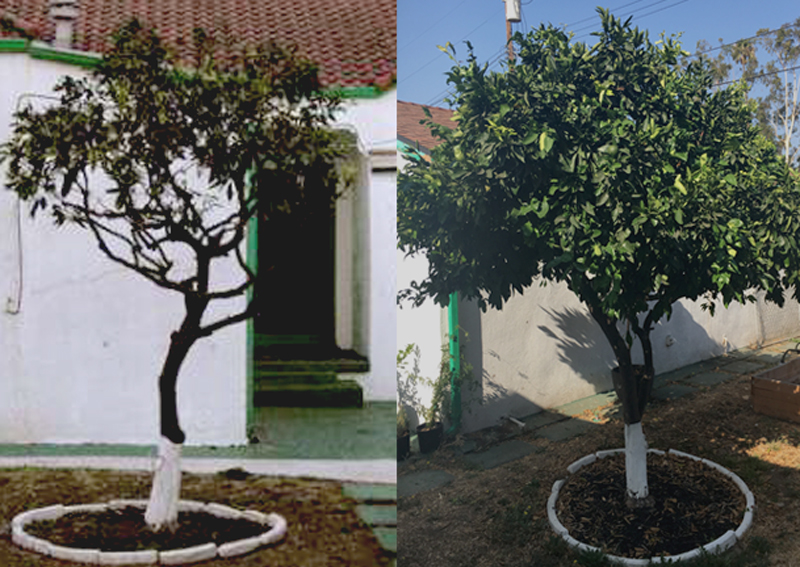 I thought this gal was a lost cause when we moved in, but with some TLC, she has become one of my favorite features of the house! 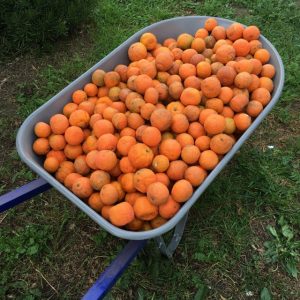 This wasn’t all of them!!

Year one, I only had one garden bed, primarily because my husband and I had no way of getting all the wood that we needed for all four beds from the store to our house, as we each have four-door sedan’s, so we had to improvise. The design of my boxes and the backyard in general is something that I am going to delve into at a later date, but rest assured, if I had started this process with the knowledge that I have now after a year of experience, things would look much different!! I’m still a little undecided if I am going to continue with things in this iteration or if I’m going to change it all—because we don’t have the final elements in place yet, i.e., the path or the fence, I could, in theory, redesign everything. But it is a lot of extra work that I really do not want to do again, so I may just live with it, ease of use be damned!! 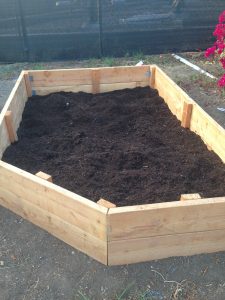 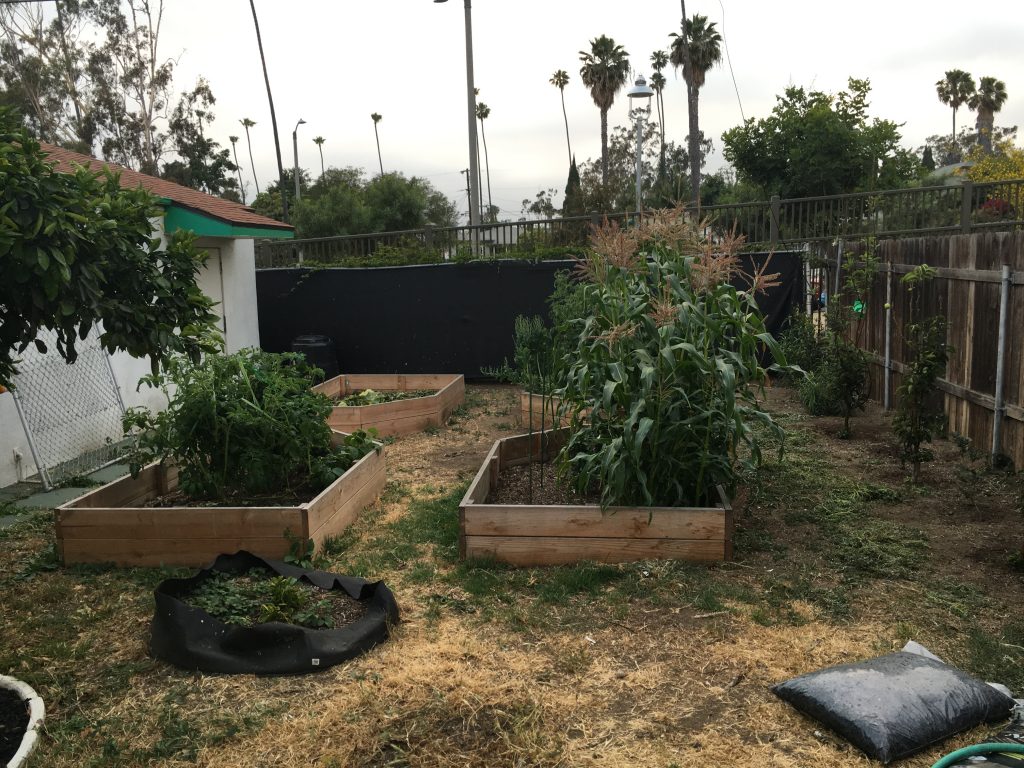 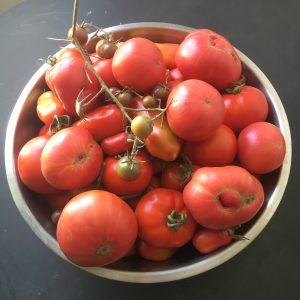 Tomatoes pretty as a painting!

I’m still enthused about growing my own veggies, which I think is a really great thing. There are some days that I just want to burn everything down back there—gardening is a lot of work, it is hot, you get dirty and sunburned, it requires near constant attention and care—but there really is nothing that compares to the joy of discovered something that you planted and cared for is in bloom and fruiting. One of the great loves of my life is taking nothing and turning it into something, which is really what we as humans do with our lives, so it is great fun to actually see that tangibly represented!

I’m going to update on my harvests and what I’m planting through out the year(s) and what I’ve learned and what I can do better. I’ll hopefully have some DIY things that you can make to improve yields and spacing and I’ll definitely be sharing pictures. I’m currently in that weird in-between period where a lot of things in the garden are nearing the end of their growing season and I’m waiting to plant others. Remember to order your garlic, onions and potato sets! They go so quickly from every grower, put your orders in now, regardless of your grow zone!!

Do you have a backyard garden? Do you blog about it? Leave me a comment, I would love to check out what you are doing with your space!